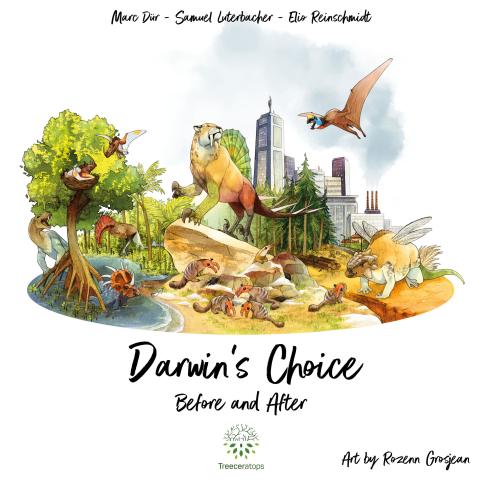 Base Game
Darwin's Choice
Service
Media Library
Copies
1
Play time
120minutes
Players Min
2
Players Max
6
Building Level
High School
Their footsteps have shaken the earth for millions of years. Large, heavy and armored, but also small, agile and deadly, dinosaurs shaped their time from the top of the food chain. Today, another species dominates, it moves on two legs, builds huge colonies and shapes the landscape like no other species before. Evolutionary, however, every challenge is also an opportunity. Find your niches, face the new situation and become Darwin's Choice.

Darwin’s Choice - Before and After is the expansion to Darwin’s Choice and requires the base game. The expansion brings over 240 new Animal Cards into play, with a focus on dinosaurs and prehistoric species. In addition, human-made events and territories set the focus of this expansion on the consequences towards nature and evolution created by humanity. The expansion fits seamlessly into the theme of the base game and creates a reference to today‘s environmental challenges. All artworks are again beautifully hand-drawn by the French artist Rozenn Grosjean, giving the game its very own style.

Since the team behind Darwin's Choice cares for the environment, the expansion will once again be solely made out of sustainable wood and contain as little plastic as possible. In addition, both the base game and the expansion will be 100% carbon neutral.

Darwin's Choice is a competitive card game in which players create their own animal species from more than 230 animal cards. These animal species will be placed in biomes that differ strongly in their requirements and food availability. The highest possible adaptation of animal species to their biomes not only ensures their survival but is also rewarded with the coveted Darwin points. In addition to a high adaptation the species with the highest competitive strength are also awarded across all zones.

Between the 3-4 eras played, conditions can change completely due to biome changes and event card effects. The task is now to adapt the successful animal species of the past eras to the conditions of the present, either through sophisticated mutations or smart migration to other biomes. However, you must always keep an eye on the animal species of the other players in order to anticipate their actions, because anyone who acts too quickly or imprudently might be unable to react at the decisive moment.

Darwin's Choice is a strategic allocation game in which you must think carefully about how to use your cards. The large number of own possibilities and the ones of your opponent lead to a high variability, which makes thinking through each action and thinking ahead indispensable. The randomness caused by drawing cards (animal cards, biomes, event cards) requires flexibility and fast rescheduling. This results in each played game being completely different and thus guarantees a high replayability.

—description from the publisher