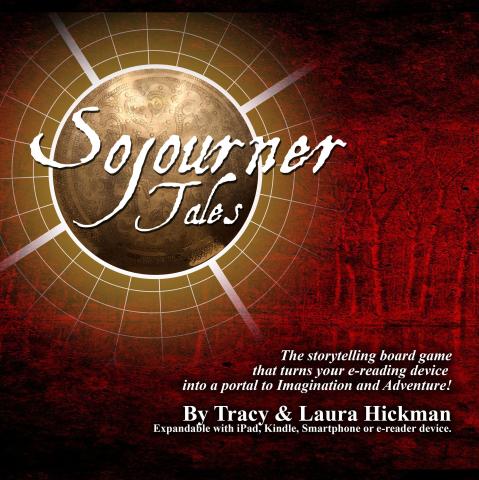 Use strategy and wits as you discover and collect the parts of your mysterious story, then be the first to complete the epic adventure. The tale is different every time you play … or you can download new Sojourner Tales to play from the website at sojournertales.com!

Beginning with the player holding the Lead Player token (Lead Player), players perform each turn in two rounds of play: a Journey round (movement) and a Story round.

Movement is by die roll down paths connecting ‘locations’ and ‘Chapter Disks’ situated on event spaces around the board. Players moves either allow them end movement on locations or ‘Chapter Disks’. If there is another player’s token on the end movement space, both players ‘dual’ for control of that space, the winner determining which of them will move 1-2 spaces forward off of that space. ‘Chapter Disks’ may be picked up off the board in the next round in which case that space is no longer counted for movement, thus offering diminishing options for movement as the game progresses.

Once all player tokens conclude movement, the Story round begins with the Lead Player. Players on ‘Chapter Disks’ of another player’s color end their round. Players who are on face-up ‘Chapter Disks’ of their own color take them off the board and put them on a display card in front of them. If they have as many ‘Chapter Disks’ as the current ‘chapter’ marker on the board, then they have an Epic Story’ event (referencing the ‘chapter’ and ‘scene’ markers on the board for the entry number) and become the Lead Player. Otherwise, they have a ‘Twisted Tales’ event, combining two cards from the ‘twisted’ deck and a third card from the ‘Tales’ deck into a short plot description.

Both Epic Story Events and Twisted Tales events generate a Tales reference number which another player at the table looks up in the Sojourner Story Book. This Story Book is either a paper book included in the game OR it is an ebook file (epub or mobi format) which has been downloaded from our website. This Story Book is the story engine of the game. Each entry may offer a particular challenge to the player, forward the ‘Chapter’ and ‘Scene’ markers on the board or grant ‘Destiny Cards’ which players may use to better their position or hinder other players during the game.

Generally, the objective is to obtain five ‘Story Disks’ of your own color to win the game. You battle other players and the Tales Book entries as well to achieve this. The conclusion finishes the story and declares the winning storyteller.