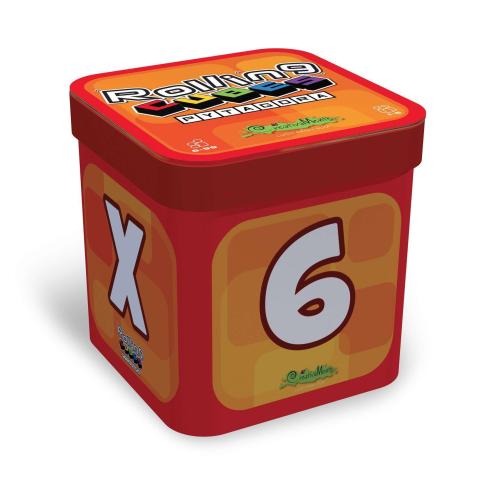 You can play 3 different games plus a YAHTZEE variant.
The idea of all 4 games is to throw the 13 dice and make an equation with most of the numbers and operations.

GAME N.1 - ONE BY ONE
Each player throws all the dice in turns (clockwise).
There is a target score to win.

GAME N.2 - ALL TOGETHER
Each player needs a sheet of paper and a pen.
The 13 dice are all thrown and left on the table in clear view of all the players. The dice must not be moved.
Each player makes the longest possible equation with the numbers and operations, and writes it on his/her paper.
There is a target score to win.

GAME N.3 - THE LAST DIE
The first player throws all 13 dice and makes an equation with the numbers and operations, moving them around to try and use as many dice as possible. When he/she has finished, it is then the turn of the player on his/her left, who throws only the dice not used for the first player’s equation, and tries to make a new equation using at least one new die. The dice used in the initial equation cannot be changed, but can be rearranged to make the new equation.
The round continues with fewer dice at each throw, until the player throwing the dice is unable to add any new ones.
The last person to add a die to the equation wins the round and is awarded 1 point.
A new round starts with a new throw of all the dice.
There is a target score to win.

GAME N.4 - YAHTZEE
The 5 combinations to achieve are:
- Blue: the equation contains at least 3 blue dice (with 4 blue dice, you get 3 bonus points).
- Green: same as Blue, but with green dice
- Red: same as Blue, but with red dice
- Poker: the equation contains 4 dice of the same colour
- 101: there is a number greater than 100