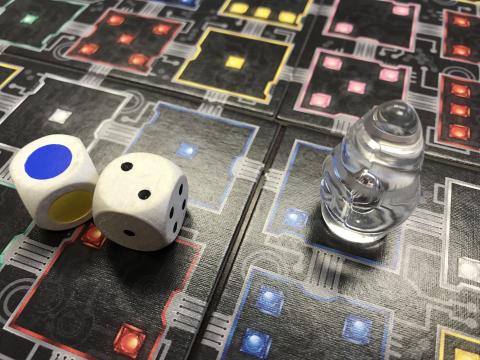 Service
Media Library
Copies
1
Micro Robots, a simultaneous play game inspired by Alex Randolph's classic Ricochet Robots, challenges players to quickly determine how a robot can move from one spot on the grid to another.

To set up, choose to use the black or copper side of the four game boards, then arrange them in a 2x2 square. Each game board shows nine dice, and once arranged the completed grid shows 36 dice, with the dice being numbered 1-6 and showing six colors, with each combination of number and color appearing exactly once. Roll the color die and number die to determine the starting location for the transparent robot, then mark this space with the transparent starting token.

If any player possesses five victory tokens, they win! If the 25 victory tokens are distributed before someone collects five, then whoever holds the most tokens wins, with ties being possible.