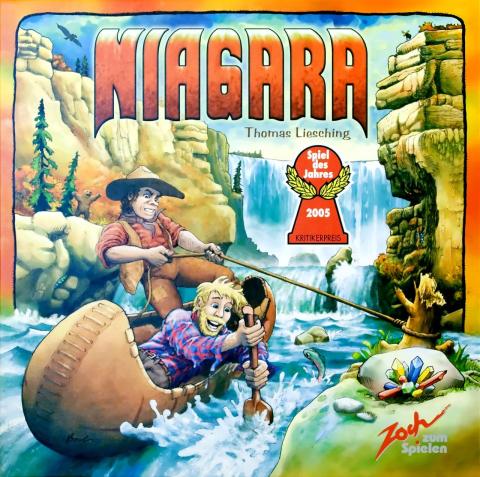 Tags
Mensa Select
Pickup and Deliver
Racing
Spiel des Jahres
Copies
1
Play time
45minutes
Players Min
3
Players Max
5
Building Level
Primary
Niagara is set in the not particularly safe world of rushing waterfalls. In the late 18th Century, the Shawnee and Iroquois Indians pointed white Desperadoes, Mercenaries and Adventurers in the direction of hidden caches of valuable jewels, in the hopes of turning them against one another and away from their territorial expansion ambitions. Players play as some of those Adventurers.

The first player to be able to claim ownership of five jewels is the winner. But the chase after the riches has some snags. The speed of the river is always changing, since the speed depends on the decisions of the players and the changeable weather. And once a canoe goes over the walls, it's a hefty investment to replace it. And there are also the Desperadoes to contend with, who aren't above trying to plunder the riches from Adventurers returning home. Niagara is distinguished by an innovative movement mechanic as well as a beautiful three-dimensional rendering of the waterfall setting.