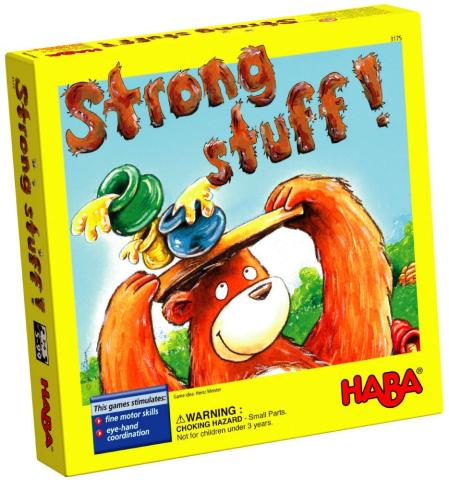 Content Area
Special Education
Tags
HABA
Dexterity Game
Fine Motor Skills
Copies
1
Play time
20minutes
Players Min
2
Players Max
6
Building Level
Primary
Bruno the Bear is ravenously hungry, so hungry that he's prone to grabbing honey jars recklessly and taking off for the woods. But will you be able to help him carry his ever-growing pile of honey jars without knocking them over?

Strong Stuff! – previously published by Goldsieber with slightly different rules as Bärenstark – is a dexterity game in which players move Bruno, represented by a wooden bear, across a series of meadow tokens. Each turn, the active player rolls the die then either moves Bruno a number of spaces equal to the number of dots on the die or leaves him in place; when moving Bruno, a player cannot touch the tray he holds or any honey jars already balanced on his head. In either case, the player ends his turn by stacking a new honey jar on the highest jar on Bruno's tray.

The honey jars come in six sizes, making stacking tricky; should any jar fall while a player moves Bruno, that player loses one of two honey drops he was given at the start of the game. Once a player loses both honey drops, the game ends and whoever has the most honey drops in hand wins.
sfy39587stp18