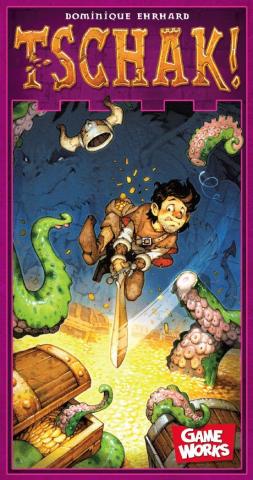 Tags
Card Game
Hand Management
Play time
40minutes
Players Min
2
Players Max
4
Building Level
Middle
TSCHAK!' is a card game in which everybody gets to play with exactly the same hands. But who will be the most successful in avoiding the troglodytes and bigger monsters, while going for the fattest treasures, or even better, the legendary rings of power?
The card deck in TSCHAK! is composed of twelve wizards (blue), twelve warriors (green), twelve dwarfs (red) and four artifacts (purple). Before the first round, a player receives three wizards, warriors and dwarfs and one artifact. (When playing with fewer than four players, deal out hands to virtual players; these are not used during the current round.) Set up the keep by placing one monster and one treasure tile face up on each of the three levels.
Players now assault the keep, trying to avoid the monsters and claim treasure. On the first level, players choose one card from their hand, reveal it, choose another, reveal it, choose a third, and reveal it. A player must create a team of adventurers with three different colors, and the strengths of these teams (the sum of the cards' values) are then compared. (The chameleon wizard with a ? equals the strongest wizard on the table. The artifact doubles the weakest character on your team.) The weakest team gets the monster card, which costs points, and the strongest team gets the treasure card, usually positive points. Ties are broken in favor of the strongest wizard, then in favor of the wizard with the wand, then the strongest warrior, and so on.
On the second level, players reveal one card, then a pair of cards, then compare strengths. On the third level, players reveal three cards at the same time. Players then compare the last card in hand, gaining 0-3 gold depending on the strength of that final card.
Once all ten cards have been played, each player passes his whole hand to his left neighbour, a new dungeon is created, and you now play with the same cards as the player sitting to your right. After four rounds, the game ends and players tally their points. Some treasures and monsters are worth a set number of positive or negative points; others are worth the square of the number of them you've collected (whether positive or negative); additional treasures have special abilities, like eliminating one monster card from the tiles you've collected. The player with the highest score wins.
Good hand management, double-guessing, a tad of luck, and the victory is yours!
sfy39587stp18