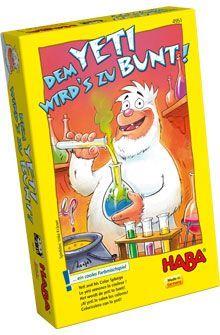 Content Area
Fine Arts
Tags
Color Mixing
Color Recognition
Play time
10minutes
Players Min
2
Players Max
4
Building Level
Elementary
A game about colors for small children. The Yeti wants to color up his white surroundings - fortunately, he discovers a color lab.
The game consists of tiles which have two colors on one side and the color you get when you mix the two on the other. These tiles are laid out in a circle (2 color side up) and the Yeti is placed onto one of them. The players then take turns rolling a die. On a result of one, two or three the Yeti moves forward the respective number of tiles. Then the player has to say which color is on the other side of the tile. If wrong, nothing happens. If correct, the player takes a token of the color s/he named. If the result is a star, the player can place the Yeti onto any tile. The first player who gets three tokens of the same color or four all in all is the winner.
Advanced rules suggest to flip the tiles around and let the kids name the two colors necessary to mix the color they see.
sfy39587stp18