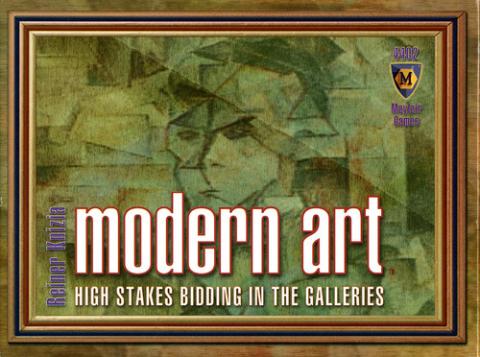 Content Area
Math
Tags
Auction
Estimated Value
Statistics
Financial Literacy
CCLS
PRE-CALC M5 - Probability and Statistics
Play time
30minutes
Players Min
2
Players Max
5
Building Level
Middle
In Modern Art Card Game, also released as Masters Gallery, players are art critics and gallery owners at the same time, trying to pump up the value of certain artists before cashing in their works. The works of five artists are in play. Each player starts with a hand of masterpiece cards, and on a turn you play one on the table to show a stake in the fate of that artist; some masterpiece cards include special actions that allow you to play a second card, draw an extra card, increase the value of a certain artist, or have everyone play a masterpiece card at once.

When a certain number of works from one artist are on the table, the round ends, and each work from the most well-represented artists are sold for $1-3. Masters Gallery lasts four rounds, with players receiving additional masterpiece cards prior to new rounds and the value of an artist's work increasing based on past performance. The player with the most money after four rounds wins.